PKR YOUTH TO GUN FOR SARAWAK 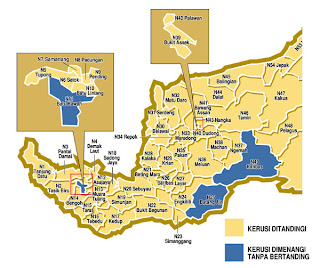 KUALA LUMPUR, Mac 9: PKR Youth is setting its sights on Sarawak where it is confident of being able to make a mark when state-wide elections take place, most likely within the next few months.

“There is an air of excitement in Kuching and when you travel to the rural areas, people come out and shake our hands and the first question they ask is when? The next one is will you be taking part,” PKR Youth chief Shamsul Iskandar Akin told Harakahdaily in an interview.

Indeed, the 35-year old Shamsul found it hard to contain his own enthusiasm. In the 2006 election, PKR Youth was not ready to take on the Land of the Hornbills.

It had not set up sufficient branches or built enough networks yet. But four years hence, it is a very different story.

According to Shamsul, Sarawakians have been watching the political developments in the peninsula very closely, especially since the landmark March 8, 2008 national polls.

“The young people in Sarawak especially the professionals have been very keen to join PKR. Our recruitment rate is very healthy and this is why PKR Youth will push the top party leadership to give the young candidates in Sarawak a chance,” Shamsul said.

“Like many other Malaysians, they were inspired by the Pakatan Rakyat victory in the five peninsula states. They have been monitoring the way we run Selangor, Penang and Kedah and the difference that Khalid Ibrahim, Guan Eng and Azizan have made.

"They felt the same injustice when Umno-BN snatched Perak away from Nizar. They can empathize with the oil royalty issue and with people of Kelantan who like them have been kept backwards because of deliberate policies by the federal government to sanction corruption."

Shamsul will be meeting Sarawak chief Baru Bian soon. He plans to get 30 percent of the seats allocated to PKR reserved for Sarawak Youth candidates, who will focus on urban and suburban areas.

Balik Pulau MP Yusmadi Yusoff has been specially tasked to spearhead operations and get them spruced up for electoral battle.

In the last state election in 2006, PKR fielded 25 candidates, DAP 12 and PAS one. Twenty independents also tried their luck. Negotiations for seat allocation within the Pakatan are in the last lap and hopes are high that there will be a satisfying conclusion.

“I am sure we won’t have the problem of overlapping seats this time around. Dissatisfaction and infighting made us lose badly in 2006. But the stakes are higher now and everyone in Sarawak knows we have to rally together under the Pakatan umbrella if we are to oust Taib Mahmud,” Shamsul said.

The scandal-hit Taib has already asked BN members to prepare for polls although he declined to give any hint of when that will be. The latest is by May 2011. His PBB holds 35 of the 62 seats held by the BN.

Nonetheless, the 74-year old Taib’s stranglehold on Sarawak has been slipping, with Sarawakians increasingly unhappy at the large-scale corruption openly taking place in their state.

Despite being one of the country’s richest states in terms of natural resources, Sarawak remains one of the poorest and least developed.

“We are happy that Taib retained the presidency of PBB. He is the symbol of everything that has gone wrong in Sarawak,” said Shamsul.

“If in the past, the folk here voted for him and PBB over gifts of RM20-30, they now know better. Their sense of injury and anger against him and the BN for taking so much from them and giving back so little will drive the reform movement in East Malaysia.”